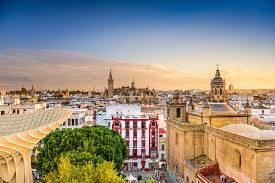 Have you just moved to Seville? Brought a house or Looking for a job? Maybe your thinking of setting up a business and becoming self employed in Spain.

So, you have shipped over the sofa, the kitchen sink and the dog at great expense.

But there’s one thing you may have forgotten. Have you got your Spanish NIE Number? Thousands of brits moved to Seville each year and they all need a Spanish NIE Number to work here or buy property. Here at my NIE were experts in getting your NIE Number sorted, quick and fast. Moving companies Seville.

GET YOUR NIE NUMBER IN SEVILLE

MY NIE is Spains number one provider of NIE Number services. Ready to get your NIE Number in Seville? Use our easy booking form below and we will get to work organising your NIE Number appointment and paperwork.

Click here to use our NIE Number booking form.

Here at MY NIE we like to go traveling so we jumped in the car and spent a day in Seville. Check out our tour below which is A guide to what to do on your trip to Seville including the best bars, restaurants, hotels and things to do, and how to visit Alcázar palace, Bellas Artes Museum and the Museum of Flamenco

Seville is the largest city in the Andalusian region of Spain and can be found on the plain of the river Guadalquivir. The people of Seville are known locally as Sevillanos or Hispalenses after the local roman town of Hispalis.

Seviles old town covers an area of around 4sq kilometres and has 3 World heritage sites: Alcázar palace complex, the Cathedral and the General Archive of the Indies. You can get your Spanish NIE number at the Police Station in Old town.

Seville’s harbour is  found around 50 miles from the Atlantic Ocean and is the only river port in Mainland Spain.

Seville is also the hottest major City area in Western Europe, with summer average high temperatures of above 35 °C (95 °F).

Seville was discovered by the Romans and called the city of Hispalis. Latter renamed  as Ishbiliya after the Muslims took over in 712.  After America was discovered, Seville became one of the main economic areas of the Spanish Empire.

Making friends in Seville even with your Spanish NIE Number could be difficult. Its a well known saying that the people of Seville will be the first people to invite you into their homes but the last people to tell you where they live.

Things to do in Seville

Seville Catheral was built in 1401 and displays  beautiful architectural flourishes, relics and historical curios. It has  80 different chapels and is the largest cathedral in the world by footage and recently made a World Heritage site.

A Mosque once stood on this spot called the court of Oranges where muslins were said to perform there abluations.

There are also hints of the mosque that once stood on this spot, especially in the Court of the Orange trees on the north side, where Muslims once performed ablutions.  Here you will also find the tomb of Christopher Columbus.

Visit the La Giralda in Seville

One of the main Tourist attractions in Seville is the Giralda which has Moorish origins being the minaret for the former mosque.. The Giralda is the bell-tower next-door to the Cathedral, and you can purchase a ticket to go to the top.

The Giralda has Moorish origins, being the minaret for the former mosque on the site.

You might be surprised to find there are no steps in the bell tower but 25 sloping ramps take you to the top. It is thought this was because Muezzin who led the call to prayer each day could ride his horse up the tower instead of walking. The lazy bugger. At the top is one of the best views you will ever see.

The Real-Alcazar is a  UNESCO-listed world heritage site. The complex is still in use by the Spanish royal family today and used as their chambers, state rooms and halls.  For a small fee you can visit the rooms inside. Can I get my NIE Number at the Real-Alcarza?

Most of the complex is deced out in the Mudéjar style and was developed by Pedro the Cruel sometime during the 14th-century. You will find amazing views of the grounds  from the elevated Grutesco Gallery.

The Plaza de España (Palace of Spain), a semi-circular plaza was made for thr American Exposition in 1929 within the Maria Luisa Park. Today it is mostly used for admin offices, but theres one main reason to visit.

Walk below the gallery to view busts of many important Spanish people plus theres a display area, Using typical Sevillian azulejos (painted tiles) , for each province of Spain.  Like a visual history lesson each province’s story is told on painted tiles.

On the corner La Encarnación square you will find a bizzar, waffle shaped wooden beamed building in the centre of  old town. Inside is thearchaeological museum of Roman times and Moorish ruins  Built 2012 by  Mayer-Hermann, a German architect.  The Locals know it as La Seta/The Mushroom and its prominence in the centre of the old town has always been controversial.

Some locals and many visitors  say its look and design is a iconic structure. On the other hand some say it’s an eyesore, but it is without doubt an unmissable attraction in Seville.  Climb to the top for some incredible views across Seville.

So you like Seville? Get your NIE Number today using our easy form at www.mynie.co.uk

HOW TO GET A TIE CARD IN SPAIN